skip to main | skip to sidebar

It's Finally over! The uptown art fair was here and Brass Knuckle Tattoo is right in the middle of it! We        had so many people stop in the shop, it was pandemonium! It was all very exciting and exhausting but played right into my never shut up constantly talking strengths. I did some tattooing during all the chaos. Our new neighbors next door are wonderful and sell Indian style dresses and cloths. The daughter of our neighbor came by with her boyfriend who got these boxing gloves from me on his forearm. He is originally a kick boxer but switched to strictly boxing a few years back. he was a cool guy who had lots of knowledge on the current boxing world, so I picked his brain and we did a fun tattooing on him. 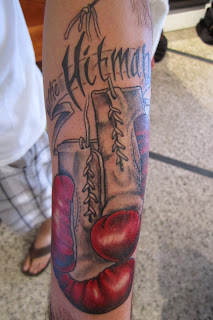 Later on Saturday of the art fair it got really busy despite the early rain. I got to meet a lot of cool people  as usual but the best were a group of girls and there mom from Manitoba Canada! Yup our neighbors to the north. I gave them a hard time about there accents and they gave me a hard time about mine. I got to see how different there culture is even though they are still very similar and close to the U.S. Well I tattooed this little phrase and bird silhouette for Karli and did a small clover on her friend Kimberly (pic didn't turn out). These were there first tattoos and I loved getting to do them, It also makes me an international tattoo artist I believe because these tattoos reside in Canada! Super RAD! 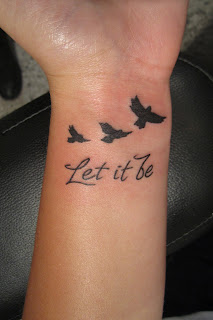 Well My Sunday Finished up in more out of state action and first tattoos. This is a unicorn silhouette on a girls butt for her first tattoo. Loved doing this because its hilarious and not because its on a butt! get your minds out of the gutter. Her and her friends are from Iowa and were visiting for the weekend. I also did some fireworks on her friend and another one of the girls got bird silhouettes. Crazy weekend with the art fair and a lot of fun! 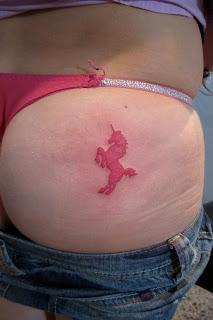 Thanks to everyone who stopped in and checked out the shop and said hi! Met some cool people and a few tattoo artists from around the metro and got to talk till I didn't have anything else to say, which has never happened. All in all it was a great weekend! Look forward to next years art fair and seeing all the amazing art people are doing!

Kyle "Unfiltered" Mack
I'm a tattoo artist. Originally from minnesota. I'm on a journey like the rest of you. I try to learn and grow to the best of my abilities.